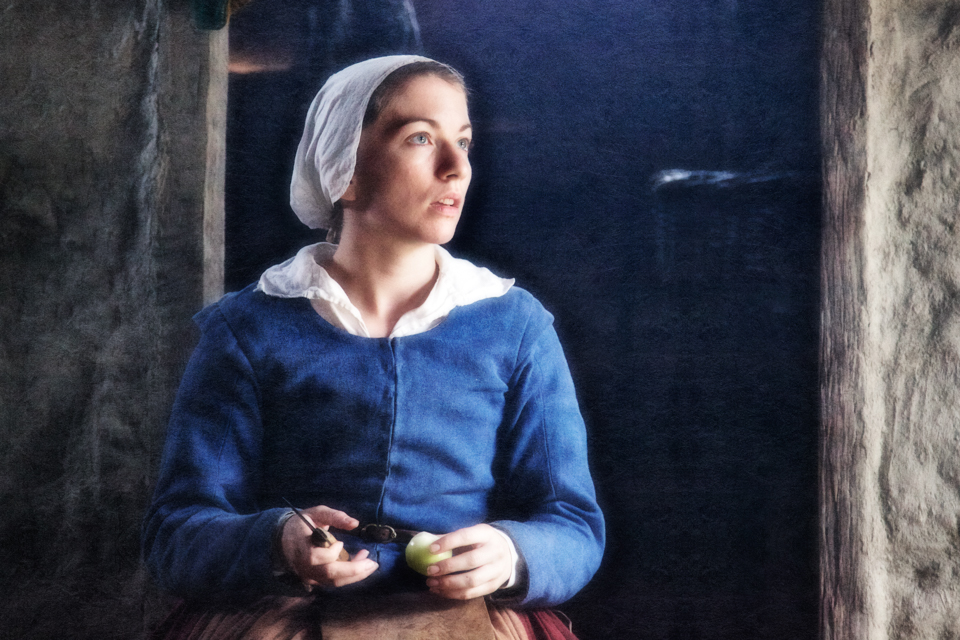 Of the living history sites I’ve visited, none capture the imagination like Plimoth Plantation. Plimoth Plantation feels real, for aside from the visitors, there are no traces of modern life. There are no signs, no artifacts behind glass cases, no areas roped off. This is truly living history, as the interpreters never leave character, and are busy going about the day to day tasks which would have occupied the time of the earliest settlers of the colony.

Plymouth has undergone many spellings throughout the years, and one of the earliest was Plimoth, hence the peculiar spelling. The idea for the museum was the brainchild of Henry Hornblower II, who began the project in 1947, on the shore of Plymouth Bay where the Mayflower II is now docked, and a part of the exhibit. Since there are no structures dating to the time of the pilgrims, Hornblower settled on the idea of recreating the village a couple miles up the road, on terrain which approximates that of the original site.

Now known as the 1627 English Village, it is the living heart of the complex. You can watch the inhabitants build and repair their homes using techniques from the period, as well as cooking, caring for their livestock, working the crops and relaxing, just as their counterparts would have nearly four hundred years ago. The re-enactors are friendly and approachable, always asking where you hail from, and acting appropriately confused when you reply with a place name which would have been unfamiliar in their day.

Noticing a young couple holding hands, one of the interpreters simply shook his head, and explained how lucky they were not to live here. Such public displays of affection were frowned upon by the governor, he explained, and would likely have resulted in a “striping,” or public lashing. Not to mention the public humiliation.

Another told of his theory on beer, and why one shouldn’t drink water. “You can’t eat earth”, he reasoned. “Instead you plant seeds in the earth, and from the earth springs food”. “Fire will kill you,” he went on, “but you can cook crops which are inedible, and it makes them edible.” He then further explained, “so it is with water. Often it’s not fit to drink, but you add the crops from the earth, and heat it with fire, and from that you get beer, which is wonderful to drink.”

Others will tell of the difficulty of life here, and the losses that the colonists went through in the early years. Many have lost husbands, wives and children. Some left loved ones back in Europe. Some are awaiting the arrival of spouses and children whom you know will never arrive. In short, those interpreting the history are more than tour guides, and more than actors. They bring the history of the plantation, and most importantly, the lives of the people to life. The sights, the sounds and the smell of the place is that of the seventeenth century, and it is rare is it that you can find that here in the twenty-first century.

The layout of the village itself is based on the historical data collected from the archeology and writings of the original settlers. Leydon Street is a dirt track leading up the hill to the fort, which gives a panoramic view of the village below and Massachusetts Bay beyond.

One phrase I heard time and again at Plimoth Plantation. When someone is asked what they did before they came here, it always ends with variations of the same statement. But I’m a farmer now. We’re all farmers here. Which was true. There was no time nor need for finer skills. At Plimoth it was all about survival, which meant getting the crops in the ground, seeing to the harvest, caring for the livestock, and keeping a roof over their heads. There was no need for printers, decorative artisans, merchants. It was all about the day-to-day survival in a harsh and unforgiving wilderness. Sewing was more utilitarian that art, and seemingly was one chore that never ended. The interpreters take part in all these tasks, including caring for the livestock, in a way which brings visitors, particularly young ones into the process. It’s not unusual to see school age children pressed into service to haul wood, hoe or help drive a cow to its pen.

The settlement of Plimoth Plantation would never have survived those first years without the help of the native Americans. The Wamanoag Homesite allows you to see what life is like in a traditional Wampanoah home, watch traditional native Amercan cooking techniques, and learn how a canoe was dug out of a tree. Unlike the English Village, the Wampanoag homesite residents aren’t in character, but are in traditional dress. They are just as willing to interact with visitors, but on a modern day person to person basis, which is a great way to find yourself back in the twentieth century after the English village, as well as learning the story of their people, and the coming of the Europeans from a native American point of view.The stories are far more effective told in a long house, sitting around the fire on a fur rug.

Plimoth Plantation also encompasses the Mayflower II, on the water in Plymouth itself, just down from the infamous rock. Plimoth Plantation worked with the builder, Warwick Charlton, in Devon England to recreate the Mayflower, the ship that brought the pilgrims to the new world. Built in Brixham, England at the at the Upham Shipyard, the ship sailed to the U.S in April of 1957. The Mayflower II is open for tours, and gives the visitor a feel for what life was like in the cramped quarters of the ship on the original 66 day journey.

And of course there’s the gift shop, one of the nicer and most complete that I’ve come across. With a full range of wares, for the kids, adults, native American products, books, cooking and things for the home, it’s easy to spend an hour or more wandering. I recommend the fudge. Rocky Road to be precise.

If you visit Plimoth Plantation, and you really should, beware the month of November. In addition to people naturally having their curiosity piqued around Thanksgiving, it’s also the time of year when school children of the area are studying the Pilgrims and the founding of the Plymouth Colony. Be sure to bring your children repellent, or avoid this month altogether. Inside the homes you’ll find fairly cramped spaces, and Plimoth begs for the opportunity to interact with the re-enactors one-on-one.

Then again, it really doesn’t matter when you go. Even with swarms of children and adults snapping pictures, Plimoth Plantation works. Perhaps it’s the commitment of the people who bring the place to life, to ignoring the twenty-first century, that allows us to as well.

Images of Plymouth, Massachusetts from The Wytchery

Haunted Plymouth: The macabre history of Plymouth, Mass., where Pilgrim and native American spirits haunt side by side

Separating fact from fiction about the Pilgrims and the first Thanksgiving

The Spooner House, Plymouth, Massachusetts: A haunting in America’s hometown

A photo tour of historic and haunted Plymouth, Mass