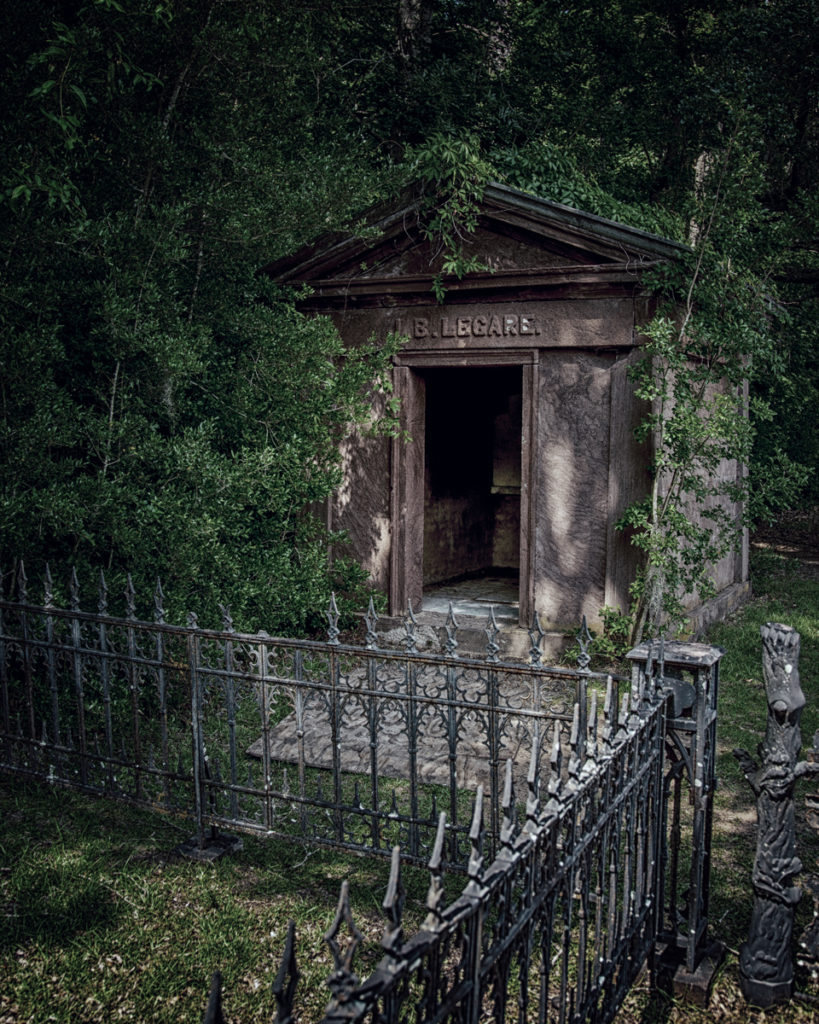 Diphtheria, now almost non-existent in the United States was once among the most feared of diseases. What made it all the more dreadful, is that children were frequently its main victims. While no one was immune, it was the children who suffered the highest rates of fatality.

Edisto Island lies about an hour south of Charleston, South Carolina on the Atlantic Ocean. The mid-nineteenth century was a golden age for the plantation owners there, for its fabled sea island cotton was among the most valuable exports in the world. It was said that on Edisto, the crop was sold before it was even put in the ground.

Much of Edisto Island consists of wetlands, which is fortunate, as a person can bake in South Carolina during the scorching hot summers. Along the coast, a breeze might provide some relief, but once inland, the air can turn muggy, heavy and still, and in many ways, deadly.

Diphtheria is thought to thrive in dank, stagnant water, which is one reason cities and countries which fall to the ravages of natural disaster frequently experience epidemics. In the years leading up to the Civil War, not much was known about the disease, and in fact, it had only recently been named, though its horror had been known for several lifetimes.

There once was a family on Edisto Island, wealthy planters, living near the northern coast. There were at least two children, a son and daughter, some years older than her brother. There might have been others, lost to time, but it’s these two that factor into our story.

It was summer, and when the symptoms first began, it’s likely nobody noticed. It could have been listlessness in the girl, which would likely have been attributed to the heat. The slaves which attended the family might have noticed that she was somewhat more pale than usual, but even that might be ignored. With the onset of a sore throat and fever, the more alert ones might have started suspecting something was quite wrong, and when she complained of difficulty in swallowing, it’s a safe bet that people feared the worse.

From there the disease progresses rapidly. A leathery, sheath like membrane forms in the throat, tonsils and nose, often leading to a distinctive swelling known as bull neck. Death comes from strangulation, as the sheath eventually makes breathing impossible. Which was the case with the plantation-owners daughter, who could do nothing but watch his daughter slowly suffocate.

In the mid nineteenth century, mortuary sciences were in their infancy. And on Edisto Island, they were non-existent. With temperatures frequently in the high nineties in the summer months, it was essential to get the dead into the ground, or the crypt, as soon as possible. Plantation houses were built to take advantage of prevailing winds, but even so, in mid-July, after even a few hours, decomposition begins to take hold.

In chasing down old tales such as these, there are usually very few facts to go on. It’s a lot like looking for the original source of the New Testement. It’s generally agreed that there was an original source, devoid of poetry, and perhaps nothing more than quotes attributed to Jesus, the long-sought Q.

In reconstructing Q, we look for similarities in the Gospels, which might have all come from an original source. It’s often the smallest details which give weight to this theory, and which might be the most credible evidence to the underlying truth of the Gospels.

With this story, one curious detail pops up over and over. The girl’s funeral and internment were delayed in order for a much-loved relative to arrive. This delay should have made the stench of the body unbearable, and there is little doubt that if there was a several day delay, the body would have been bloated and blackening. Nosegays were popular at funerals, not for the bright cheery mood brought on by flowers, but in order to hide the stench of the body.

But it’s also agreed that when the time came for the girl to be brought to the crypt, she was still as beautiful, and fresh smelling as she had been in life. Diphtheria was a frightening disease, and those whose job it was to carry the body into the crypt were nowhere to be found. So it came down to the father to carry his beloved daughter into the darkness and lay her on the stone slab inside. Or, depending on how full the crypt was, upon the decomposing remains of the girl’s ancestors.

The heavy marble door was closed, locked, and the procession made its way home, to rebuild their lives without the lovely flower which had brought happiness to the house.

In about a decade, the drums of war began to beat. The girl’s younger brother, now a young man, joined his regiment and went off to war. The family was proud of the young soldier, looking splendid as he rode off in his uniform. And like too many in that dreadful conflict, the next time the family saw the son, was in a pine box.

There was no thought of opening the coffin and viewing the horror that lie within. Instead, a quiet ceremony was held, and the coffin was brought to the crypt. The key turned in the lock, and with the help of a couple of strong men, the heavy stone door swung open to reveal another nightmare.

The door opened and a clattering of bones was heard, as the remains of the young soldier’s sister scattered on the ground. Here and there on her frame, leathery skin clung to bone, and the gown in which she was interred still clung to her in obscenely bright, white rags. Rather than being dead it seems, she had only been in a coma. And when she awoke from the coma, it was to discover she had been buried alive.

We can only imagine the horror she must have felt, waking from a deep sleep to total darkness, for inside the tomb there are no lights, no windows, except perhaps a small opening near the ceiling for ventilation. How horrifying it must have been to see with the first light peeking through, the decomposing bodies of her relatives. Or perhaps there was no window, no light to penetrate the tomb, and she only realized where she was when her hands touched the corpses in the darkness. Maybe the only light in the crypt came from the keyhole of the door, which must have drawn her to it in hopes of escape.

A tomb is impossible to open from the inside, except for the cases of the most paranoid, who feared being buried alive, and had an escape mechanism built-in. This crypt had none. When her family found her, the bones of the girl’s fingers were shattered and frayed, from frantically clawing at the door, and trying to dig through marble with her bare hands to escape.

It’s said that screams were heard in the days following the girl’s internment. But little attention was paid to them, as they sounded far off. And after all, it’s a graveyard. Southern graveyards are known for their ghosts.

The girl’s remains were once more laid out, and her brother placed inside the crypt. And once more the door swung closed and was locked. But shortly afterwards, the door was found ajar. Again it was closed. Then it was found wide open.

This went on for sometime, until a more permanent solution was found, which made it impossible to open the door. And yet, again it was found open. This time the tomb was sealed, and this time the door was found on the ground, off its hinges.

Never again did they try. Instead the remains were buried, and the door embedded in the floor of the crypt. Where it remains to this day. And for those who look closely, the scratch marks of the doomed young girl can still be seen.

This story was related by a young man named Grason who led one of the Ghost and Graveyard walking tours in downtown Charleston. It seems to be based in part at least, on a story from the book “More Tales Of The South Carolina Low Country” by Nancy Rhyne. I also grabbed bits and pieces from personal versions which can be found online.

Grason related that he had visited the crypt himself and found scratchings on the floor. He also said that it was on private land and the owners didn’t like visitors. However, most accounts describe it being the crypt of L.B.Legare, in the graveyard of Edisto Presbyterian Church. The church dates from the early 1830s, and retains its original character, with the original pews, and the benches above reserved for slaves.

Still others claim the crypt was at Pon Pon Chapel, further west in Colleton county. There against the woods, in keeping with the story, one finds the remains of a crypt, of a family of Irish origin, which is now reduced to a few bricks and barely standing walls.

In the end it doesn’t matter which is the actual crypt. At least not for generations of children and adults who have spent time on Edisto Island, and stood outside the open door of the tomb and remembered the girl who was buried alive.

Gothic Travel Rating: The Edisto Presbyterian Church sits not far from a place called the Serpentarium, so it’s a safe bet that slithering things will be nearby when visiting the Legare tomb. Just off the main road onto the island, there’ll usually be the sounds of traffic buzzing by. Luckily the tomb is behind the church, next to the woods, and particularly at twilight it’s a great place to get into your southern gothic mood. For those who believe it to be Pon Pon Chapel, it’s a bit more isolated, and probably a bit more romantic with the ruins and all. Not particularly frightening, at least any more so than any other graveyard, unless you count the reptile possibilities. A strong three crypt rating for either location.

The Charleston Ghost and Graveyard walking tours are informative, fun and relate some truly good ghost stories. Also a great way to see and get your bearings in downtown Charleston. Certainly one of the better of such tours I’ve been on. Four crypts. For more info www.bulldogtours.com/