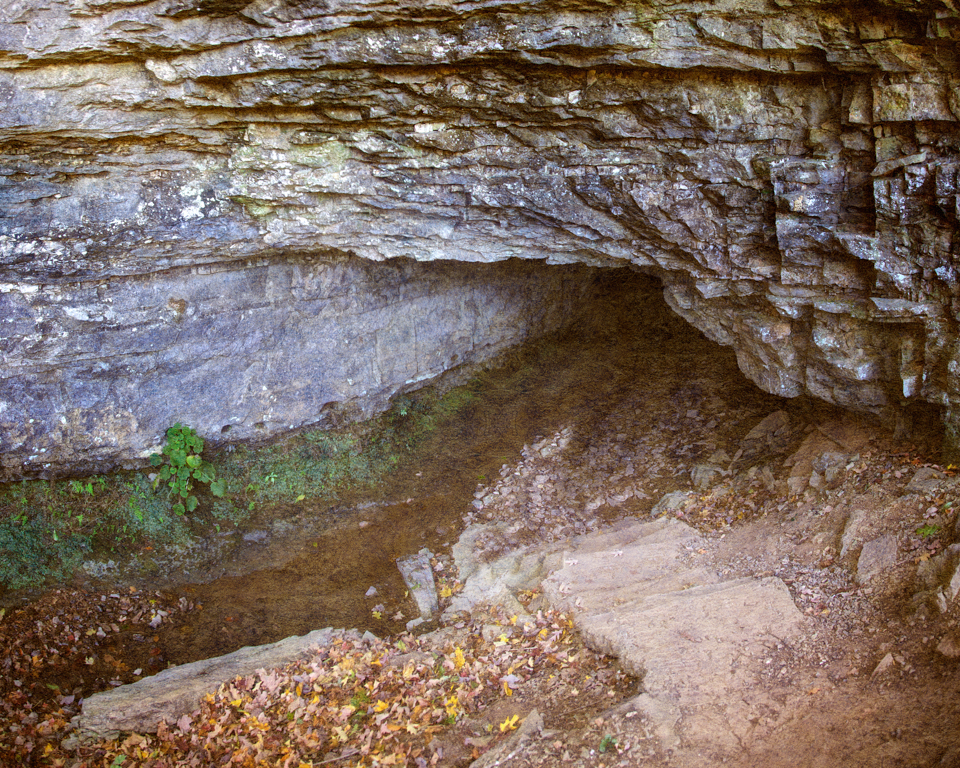 “When we were kids, Jerry used to make fun of Herbie Bell, making different names up based on Bell. Hell’s bells. Herbie’s belly, shit like that. Anyway, one day here comes Herbie and his dad, who informs us that Herbie is going to kick our asses for making fun of his name, and afterwards he was going to tell us why. So Herbie starts kicking the shit out of Jerry! Every once in a while Jerry would get get the upper hand but Herbie’s dad would come over and pull him off, and Herbie would go back to punching him. Finally Jerry was all bloody and just gave up. Then his dad told us the story of the Bell Witch, and how they were descendants of the Bell family, and you didn’t make fun of the name. I was just scared shitless that he was going to kick my ass next.”

I first met Todd Lane when I was three or four years old, and we’ve been close every since. So it was only natural that since I remembered this story, and we were going to Nashville anyway, that we visit the Bell Witch Cave and Cabin in Adams, Tennessee together.

Back in high school, rumor had it that Herbie was not only a direct descendant, but also of the generation which the witch was supposed to appear to another Bell family member. The combination of factors that determined who that might be escape me now, but it was generally believed that Herbie fit all the criteria. It’s also worth mentioning that by the time he was out of his teens, Herbie’s hair was snow white.

In the interest of full disclosure, I should also state that if you go back in my family tree far enough, you encounter the Bell family of Tennessee. Which might also explain some of my own affinity for the weird, who knows?

Finding Adams, Tennessee and the Bell Witch Cave is easiest when taking the correct exit, which I did not do. Instead we were treated to some rolling farmland, which still hinted at the wilds the Bell family would have encountered when they first came into the area. Eventually we found ourselves in Adams, made the proper turn at the crossroads and soon found ourselves on Halloween, at the Bell Witch Cave and Cabin.

There wasn’t exactly a throng there, but probably fifteen curious people or so. We ponied up our twenty bucks and were told to follow the trail down to the cave by a burly man, who owns the property. He called ahead via walkie talkie that two more would be down for the tour.

It’s a fairly steep hike down to the cave, though easy as the trail is clean and pretty easy walking. The bluffs tower overhead, and by the time you reach the cave, you can see the Red River rushing over stones thirty or so feet below. In fact, the cave itself is fed by an underground stream, which during heavy rains make it impassable, and results in a truly spectacular waterfall as the water rushes from its mouth into the river below. In other words, call ahead before making the trek to Adams, as if the water is up the cave is closed.

The burly man’s wife acted as tour guide for the cave, and chose to let us wait for the cabin tour to learn the story of the Bell Witch. (You can read about it here). As you enter the cave you’re walking through the stream bed, which is always at least a little moist and slippery, so good shoes with traction and a bit of protection from sharp rocks are in order.

Eventually the passage opens up into a fairly large room, where our guide stopped and began to relate the story of the cave, and the various odd occurrences which occurred here.

To begin with, animals won’t go in the cave, and those that do act very strangely. The only event which happened to the Bell family that directly related to the cave itself occurred when Betsy Bell and a group of friends decided to explore the cave. A little boy became stuck in a hole, a voice said “I’ll get him out”, then invisible hands drug him free and down the hill by his hair a bit further to the cave entrance, then lectured the kids on the dangers of playing in caves.

It’s thought however, that the Bell’s used the cave as a natural refrigerator, as the cave itself keeps a constant cool temperature.

Some believe that the Bell Witch Cave was a portal from which Kate came into this world, and where she went when she stopped tormenting the Bell family. It’s also thought by some that she’s there still. Both the former and present owners can vouch for having seen misty, human-shaped forms moving through its passages. The current owner related in her tour that what she see is often in the form of a person, but looks a lot like heat waves radiating from hot asphalt on a highway.

One theory about who Kate, the Bell Witch actually was, is that she was a native American whose grave had been disturbed. Our guide related to us that the bluff above the cave contained ancient Indian burials, and that legend had it that several had been disturbed in the early days of the settlement. She then pointed to the floor of the room where we were standing, to a small rectangle carved into the stone. For all intents and purposes, this appeared to be a box grave, a staple of Mississippian era native american burials.

Our guide told us that one visitor to the cave had told her the grave might be 500 years old. Another told her a thousand, so all she could really vouch for was that it was old. Now I’m no expert on native American culture, but even I knew that it was a Mississippian era grave, and that they were here roughly 1,500 years ago, before disappearing about a thousand years later. In other words, we weren’t going to get much in the way of science on this tour, which is fine. After all, the story of the Bell Witch is folklore. But still, a bit of time and Wikipedia could make the presentation a lot more professional.

She then encouraged us to take lots of pictures, as many times pictures show us things which the human eye can’t see. Like orbs, mists and other strange phenomenon. There isn’t space here to list all my objections to this type of evidence. Briefly, most can easily be explained by atmospheric conditions, cheap cameras and unskilled photographers.

More evidence came as she related people’s experiences in the cave. People are frequently reporting being pushed, touched and a few have claimed that they feel a heavy weight pushing them down, preventing them from getting up. I certainly wouldn’t be one to say that was impossible, but can’t fully discount that the atmosphere in the cave, which is downright creepy, could have an effect on some people’s psyches. Perhaps those people are psychic, perhaps they’re simply open to suggestions, particularly after hearing the stories. The worst I encountered was a crick on my neck from keeping my head tilted, and a knot on my head from when I didn’t and cracked my skull on the ceiling.

Onward we marched into another room with a large blob of stone in the middle, the result of centuries of water dripping from the ceiling. Some of the shapes in this room are truly outstanding, particularly one which favors a demon straight out of the nether regions of hell itself. It was here that a certain war veteran once dismissed the tales as poppycock, only to find a few minutes later when he tried to get up, that he was held fast to the stone. He certainly became a believer in the Bell Witch very quickly, and vowed never to return to the cave.

Then it was the slippery hike back out of the cave and huffing and puffing up the hill to where the Bell family cabin has been reconstructed. Believed to be an accurate recreation of the cabin that once housed John Bell, his daughter Betsy and the rest of the clan, it does not however sit on the same spot as the original. As it turns out, that spot is a ways off, on land still owned by the Bell family estate.

After being warned by the burly man at the ticket box that they “don’t allow no picture taking in there,” we were herded into the cabin. There you sit in each room and listen to a CD narrating the story of the Bell Witch and her attacks on John Bell, her kindness to Betsy Bell, and a pretty fair amount of the legend itself. For example, according to legend, Andrew Jackson heard of the story of the Bell Witch as it was occurring, and with an entourage visited the cabin. While there, members of his party were attacked by the Bell Witch. However, a look at where Jackson was during this time makes a visit to the Bell Cabin unlikely, as Jackson was seldom even in Tennessee during the events time. This is of course, a fact not brought up in the presentation at the Bell Witch Cabin. Instead, legend is treated as fact.

Scattered throughout the cabin are mannequins, which are intended to show visitors what life in the cabin must have been like. Unfortunately, many of these mannequins appear to have made their way to the cabin following their tenure at department stores, and to be honest, it all seemed a bit cheesy. Though it should also be said, that the one in John Bell’s deathbed was shockingly lifelike on first glance.

There’s also a museum in back of the cabin, though that’s mainly for those looking for every bit of history on the Bell family imaginable.

And then we filed out of the cabin and back into the fall chill, with nothing left to do but wander back to our cars, trying not to get lost on the Tennessee backroads.

I wanted to like the Bell Witch Cave and Cabin, I truly did. Not just because it was one of the stories that got me hooked on the paranormal, but because the owners truly seem to believe the tale, and believe in the importance of the story. And they give it a good shot, they really do. But when your location is in the middle of nowhere, and only of a peripheral interest to the story itself, they don’t have a lot to work with. It’s an interesting cave, beautiful scenery, a great story, but honestly, during the cabin tour there were times I caught some in the party stifling giggles from the goofiness of the presentation. That the owners don’t present a debunking of the legend is understandable, but perhaps injecting a bit of skepticism into the narrative would in fact, make the tale a bit more believable.

The Bell Witch Cave and Cabin gets a generous three crypts for effort, in hopes that with a bit more work, and maybe an injection of cash they’ll actually earn it.