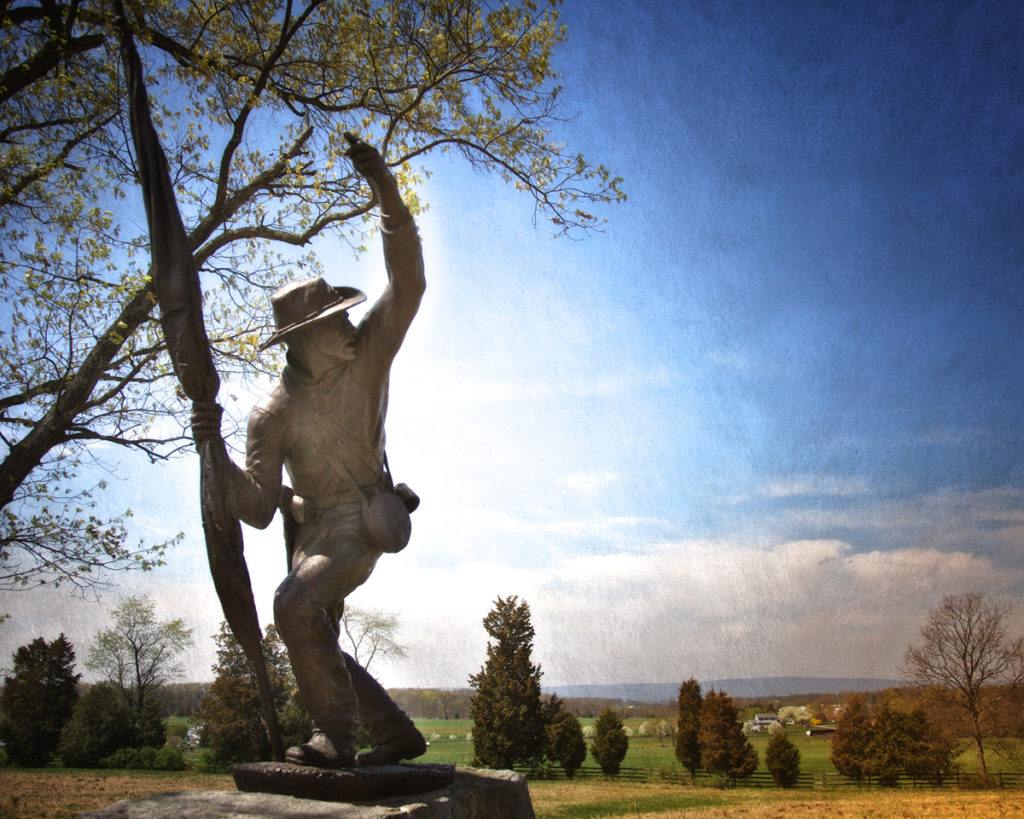 The North Carolina Memorial at Gettysburg National Military Park, Gettysburg, Adams County, Pennsylvania.On the afternoon of July 3, 1863, approximately 13,000 Confederate soldiers, in a line a mile long, stepped out from the woods, marching side by side, all looking to converge less than a mile away, and in the process, crush the Union army. In the light of history it’s easy to see each of those men as a number, but in truth they were human beings. They had a mother and a father, there were brothers and sisters back home, wives, girlfriends. Each one of those men had a life, a life which was precious to them. They laughed, they loved, they cried and they knew fear.

And men? The truth is many were no more than boys, fourteen, fifteen years old. Far from home, and all that distance walked, and no way back but to walk it in disgrace or honor.

The bombardment of the Union lines which preceded the attack was largely without effect. But the psychological toll must have been massive. Up to 170 southern cannon were joined by about 80 northern cannons, in a two hour barrage that was likely the largest display of artillery in the war to that point. The smoke which covered the field of battle helped to hide the fact that the Confederate cannons were usually overshooting the mark. When the Union cannons fell silent to preserve ammunition, the southerners interpreted it to mean that the cannons had been destroyed.

Though named for him, the attack wasn’t led by Confederate general, Maj. Gen. George Pickett, but instead by Lt. Gen. James Longstreet, who predicted its failure. He claimed to have told General Robert E. Lee, who ordered the attack, “General, I have been a soldier all my life. I have been with soldiers engaged in fights by couples, by squads, companies, regiments, divisions, and armies, and should know, as well as any one, what soldiers can do. It is my opinion that no fifteen thousand men ever arranged for battle can take that position.” When the time came to move, Longstreet could only nod, unable to bring himself to verbally order the strike. In addition to Longstreet’s troops, men under the command of Gen. A.P. Hill, who were already worn down from heavy fighting two days before, and Pickett’s division made the fateful attack. Pickett was slated to lead the charge, and so had had his name associated with futility ever since.

There was no cover from the Union fire. The day was humid, hot – pushing ninety degrees, and the typical uniform was heavy. Many were barefoot, as the reason for heading to Gettysburg was to raid the shoe factory there (editor’s note: this appears to be a myth. See comment below). It’s easy to imagine the fear, their hearts pounding, the sun bearing down, waiting for the moment when the enemy would aim their weapons at them and let go.

The Union cannon were loaded with canister – scrap metal, nails, any kind of steel they could find, which turned them into giant shotguns. A cannon typically fired a cannonball, intended for a specific target. Loaded with this kind of debris, it cut a wide swath through lines of men walking side by side, ripping skin from bone, literally tearing them to pieces. By the time the Confederates reaches Emmitsburg Road, their numbers had dwindled under the withering fire. To cross the road, the troops had to climb over two five foot fences, under devastating fire. After scaling the second and wheeling to face the enemy for the last few hundred yards, it must have been like facing the gates of hell. Of the several thousand who made it over the fences lining Emmitsburg Road, very few returned.

The Confederate left virtually evaporated. Union soldiers left their positions to fire indiscriminately into the southerner’s ranks. Those who made it to the low stone wall which marked the Union positions faced a line of men four deep, standing and firing into their faces at point blank range. Hot, exhausted and having watched thousands of their fellow soldiers die, an untold amount found death at the end of a bayonet. As the southerners reached a junction in the stone fence called “the angle,” later known as “the bloody angle,” the Union line opened up and the southerners poured through. But too few, and too late to turn the tide. Captain Andrew Cowan of the 1st New York Independent artillery, wheeled two cannons into place to face the oncoming tide of southerners, loaded double loads of canister into each, fired, and the entire Confederate line before him was obliterated.

In less than an hour it was over, and with it, the last great hope of the Confederacy.

Belief in a cause made these men walk into this kind of hell, and before the last of them finally made it to the union line, more than half lay wounded or dying. For the wounded more torture awaited. A ball to the arm or the leg usually meant the saw, without benefit of morphine.

There have been more horrendous battles, and perhaps many more just as senseless. But you have to wonder what kind of psychic stain an event like this leaves on the landscape. How much blood seeped into the earth that day, how many people lay on the ground and looked to the sky as life left their bodies. It would be nice to think that over the years we’ve evolved. But instead our weapons have just grown more powerful, more accurate. Gettysburg is considered one of the most haunted places in the country. Isn’t it time we started listening to what these ghosts are telling us?