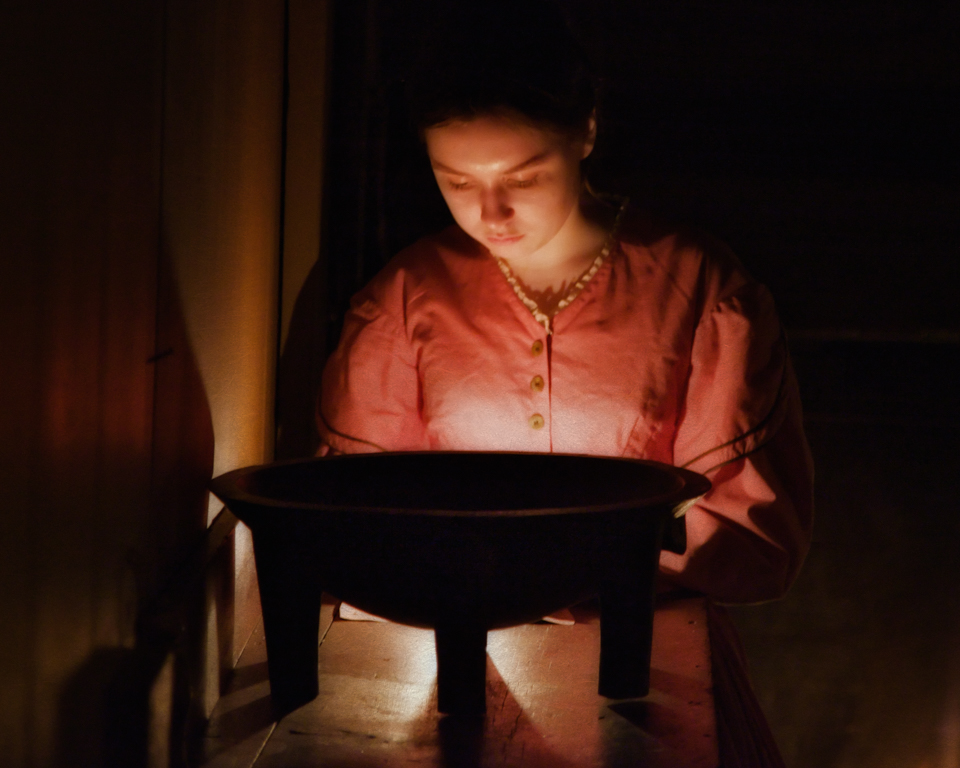 Modern technology sounds a death knell for old ways. This has been true since the stone age gave way to the iron age I’m sure. But is it possible that modern conveniences screw us up, as much as help?

Old Bethpage Village Restoration on Long Island holds Candlelight Evenings each December. While most of the buildings date from the nineteenth century, the way these evenings illuminate our understanding of life in the past, would apply equally to the colonial era, or even the middle ages. For the history of illumination has been amazingly consistent.

Originally there was the fire pit, and then likely torches of some sort. Certainly torches were well in use by the Greeks and Roman periods. The candle is thought to have been first invented by the ancient Egyptians about 5,000 years ago, and re-invented independently by different cultures throughout the world at different times. Lamps came along much later, and while they offered some improvement over the candle, it didn’t change things that much.

Humans’ natural cycles when it came to sleep, was dependent like so many other aspects of life, on the sun. It’s a pretty simple concept: When the sun goes down it gets dark. A fireplace only puts off so much light. Try reading by the light of a log fire for instance. Also consider the fact that each log you throw on the fire had to be taken from a tree which had to be chopped down or scavenged, cut into sections, split and then hauled to the home and stored. In the case of peat fires, the job can be even more time consuming.

So you didn’t want to waste wood. The same applies to candles and oil for lamps. If you didn’t have a source for the raw materials and couldn’t make them yourself – which was time consuming as well, you had to trade or use currency to buy them. And in the American Colonies, for most people, hard currency wasn’t something to toss around.

Stare into a campfire at night and what happens? You get sleepy. The natural thing to do after a long day of work, is to go to bed. Sleeping required zero resources, except possibly a bit of fire in the fireplace for heat. But what happens come winter, and you get 12-14 hours of darkness? People don’t typically sleep that long, instead as even modern science agrees, 7-9 hours is about all a person needs.

Where science and tradition disagree, is how that eight hours is achieved. In the modern world we like to knock it off straight through. It’s very efficient, leaving more time to work so we can pay for the things that make our life easier. Which adds up to working more, which leads to less time to live your life, and so the part that gets chopped is sleep.

But it turns out it hasn’t always been that way.

According to Roger Ekirch, author of “At Day’s Close: Night in Times Past” and a sleep historian at Virginia Tech University, our ancestors tended to sleep in two segments, each of about four hours in length. Known as segmented sleep, Ekirch found examples in everything from legal briefs to Chaucer’s Canterbury Tales, of what was called first sleep and second sleep. He even points out that a 17th century translation of first sleep in Homer’s The Odyssey was translated correctly, but changed in the 20th century when translators no longer practiced segmented sleeping, and therefore didn’t understand its meaning.

Segmented sleep in the past was usually augmented with a short nap in the early afternoon, a tradition which still survives in many parts of the world. The space between the two segments could range upwards of an hour, and was an ideal time to read, write, talk, have midnight visits or even engage in petty crime. Among the peasantry, this was the time you were most likely to engage in sex, as you were more well rested than prior to first sleep, and the kids who might be sharing the same room would be more likely to be asleep.

Prior to falling asleep, and just after waking up, known as hypnogogic and hypnopompic states, are two of the times when humans are most relaxed and at peace. In the rush to fall asleep and to start your day, these two states are given short shrift. Which is a shame, as those two states are part of the natural restorative that heals the human body. With segmented sleep, you are encouraged to take your time in falling asleep, and to wake and start your day slowly, to enjoy the relaxed state you find yourself in. In addition, with an extra sleep segment, the number of times you experience these states is doubled. All one has to do is read the news to realize that we all need to relax more.

Work done by Thomas A. Wehr of the National Institute of Mental Health, points to the fact that when people awake from first sleep, they tend to come out of it during the REM stage, and are more likely to remember their dreams as a result. The period of wakefulness between segments was known as the watching period, and is marked my a more relaxed and often thoughtful state. Which is an ideal time to contemplate the meaning of those dreams. Dreams, while not fully understood, are often thought of as a way in which the subconscious explores unresolved issues, and with nightmares, sometimes we don’t like what we see. What better time to confront our thoughts, fears and inner demons, which too often with modern sleep habits are never addressed, as many of us never remember our dreams, in the rush to start the day?

It goes without saying, that what’s thrown off our natural sleep patterns, which incidentally are shared by other mammals including giraffes and rodents, is electric light. The light bulb has allowed us to work, and play much later in the evening, so the time available for sleep is shortened. Cultural norms don’t help, as we’re constantly being taught that what we need is eight hours of uninterrupted sleep. Luckily, through the work of these researchers and others, different schools of thought on this issue are growing in evidence and popularity, and we’re learning once again that the old ways are often the best ways. Artificial light allows us to keep our lives running on a fixed schedule, whereas following the patterns of sunrise and sunset allows for a more flexible lifestyle, more attuned to natural ways.

A word you hear bandied about at Old Bethpage Village Restoration’s Candlelight Evenings is “magical.” That it’s often held on some of the coldest nights of the year helps, as you not only get a feel for how our homes looked in times past, but also how it felt to come in from the cold into the warmth of the hearth and home. So it’s fitting that one of the activities which our forefathers often engaged in between first and second sleep, was visiting their neighbors. There’s a magic which one finds in a home lit only by firelight and candlelight, which can only be surpassed by the peace one feels when they blow the candle out.