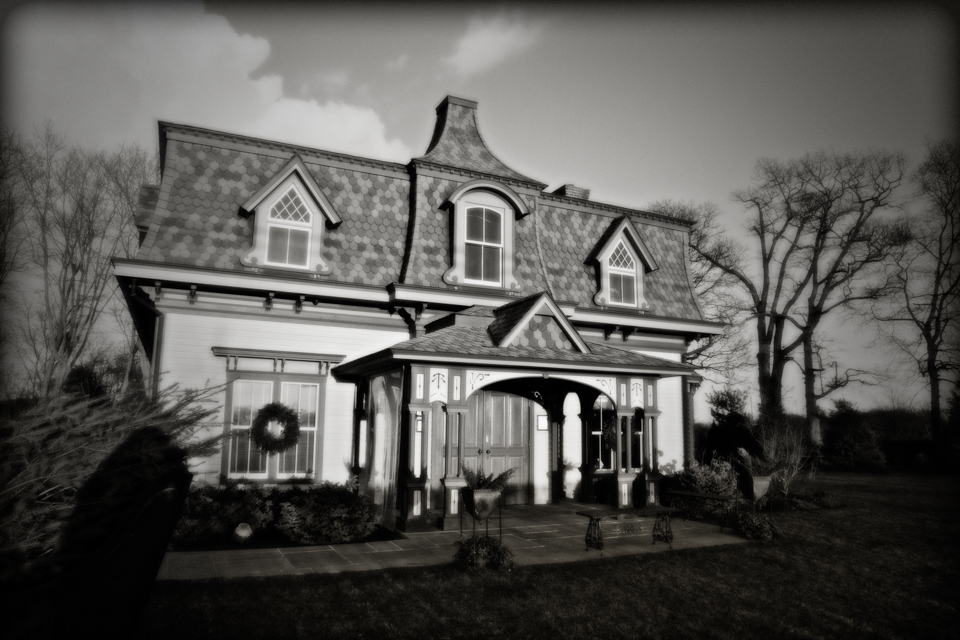 One could argue that the main character of The Witching Hour, a novel by Anne Rice is the Mayfair mansion on First Street in New Orleans, Louisiana. In the book, the house is painstakingly restored, making a dandy home, custom-built for the spirits that live within.

But this begs the question, what ties a spirit to a particular location? When you gut a house and rebuild it, is it the house or its furnishings holding the spirits earthbound, the ground the house sits upon, or is there something familiar about the structure, which as long as it is extant, even in a restored version, will be familiar enough to the spirits so that they can find their way home?

It’s also possible that as long as the house looks enough like the original, and sits upon the same spot, and looks haunted, that people will still tell the old tales, and therefore keep the spirits, even if they never existed, alive.

The Jamesport Manor Inn in Jamesport, New York, out on the north fork of Long Island is a study in these questions.

Aptly described by the New York Times, “The Jamesport Manor Inn looks like Halloween every day of the year. The landmark, which dates from the mid-19th century, would be a suitable abode for the Addams family. It is a typical haunted house, Hollywood style.”

And yet it hasn’t always been so. In fact, before the present owners purchased the house in June of 2005, it had fallen into disrepair and was in such a dilapidated state that locally it was referred to as “the haunted house.” No doubt the look of the house itself drew people to make this conclusion. But that a woman was frequently seen in the center, upstairs window of the abandoned house helped quite a bit.

Originally known as the Dimon Mansion, the restored Second Empire building that you see today, beautifully topped by a multi-colored slate Mansard roof and surrounded by farmland, is a fair approximation of how it must have looked after an expansion in 1870-80.

Originally it was thought that this was the time the house was built. But it seems to have been a much older structure, as evidence turned up by the present owners showed.

The Dimon family first laid claim to the property in the 1750’s, and in all probability, Jonathan Dimon built the original structure around then. His son, also Jonathan, served in the American Revolution as a minuteman, a minority in a part of New York which swarmed with loyalists.

It’s fitting that the family was a family of shipbuilders, as one of Jonathan’s descendants collected a cannonball which came rolling through the fields as he watched a battle in the 1814, during the War of 1812, fought out on Long Island Sound and the nearby shore. The Dimons founded a shipyard in New York City with Stephen Smith, and built what is believed to be the first clipper ship, the Rainbow, as well as its more famous sister, the Sea Witch. Both the Rainbow and the Sea Witch set records for the fastest trip from China to the United States in the middle of the nineteenth century. In addition, Smith and Dimon were also associated with Cornelius Vanderbilt, both in racing competition and friendship.

As the Dimon family fortune grew, the house in Jamesport retained its position as the ancestral home, with the children summering there, in addition to frequent visits. But in the mid 19th century, the first of the scandals and tragedies which would rock the family occurred as one of the family ended up in the cups of the demon rum, and took up residence in the town’s poor house.

John F. Dimon made his fortune trading bird crap from Peru. The guano trade was incredibly lucrative, being used as fertilizer, and it was in Peru where John met Rosalie and fell in love. Sometime in the 1860’s they came back to Jamesport and made their home in the manor house.

But their lives in Jamesport would not prove to be a happy time. In 1868, their ten-year-old daugher, Margaret Olivia was climbing one of two large oak trees in the front yard and fell, breaking her neck. Her mother, Rosalie was plunged into an inconsolable despair, from which she never recovered.

Perhaps in an attempt to cheer up his wife, John F. began renovating the home about 1880, stripping it down to its frame and essentially starting over, building something quite like the structure you see now. Another daughter, Laura became embroiled in scandal with her lover and future husband, which became tabloid fodder at the time. Laura later accused her husband of threatening to poison her, a fate which suspiciously befell his next wife.

Laura’s future proved no more cheerful than her mothers’. Her own daughter died at the early age of 29, and Laura, â€œdazed by an immeasurable and uncomprehended grief,â€ visited her grave on an almost daily basis till her death four years later. Her obituary read â€œBorn in Lima, Peru, she was brought to this country in early childhood, and reared in strict seclusion in the old mansion on Manor Lane. . . . Of remarkable beauty in youth, time and sorrow but softened that beauty as it faded, and the little black-robed figure with the white pathetic face, never failed to appeal to the sympathies even of those who did not understand.â€

By 1931 there were no more Dimon’s living in the manor house, and in 1947 it became the Twin Oaks restaurant, named for the trees in the front yard. The restaurant went through several owners and several names, before it was eventually abandoned and left to its later incarnation as Jamesport’s haunted house. Rumors swirled about the building, in addition to the woman in the second floor windows, it was also whispered that the house, probably without basis in fact, at one time was a brothel.

When Matt and Gail Kar and Frank and Anne McVeigh began lovingly restoring the property in 2006, they were amazed at the home’s features which were continually being revealed, such as beautiful parquet floors hidden by ragged carpets on the first floor, as well as the frame of the original 18th century house. And by fall, the building was almost ready to open for business, when on the early morning of October 20th, some rags seemed to spontaneously combust and the whole building was gone in just over an hour.

Luckily, much of the house had been documented during the restoration, and by August of 2006, with the support of the community and a gaggle of architects and builders in tow, the house rose again, almost identical to the original, except where modifications had to be made to bring it up to code. Included in the restoration are replicas of the original archways through the house, with their signature decorative keys.

Ironically enough, it was these keys which put me in mind of Rice’s The Witching Hour, where a signature architectural motif of keyholes is what acts as a portal for the spirits of the Mayfair ancestors to recognize and find their way home. And perhaps it’s this attention to detail which has brought the spirits back to the Jamesport Manor Inn.

According to Matt Kar, “The first few weeks that we were open, someone came in and had this candle that they said would bring the Manor’s ghost back,” Matt told me. “I told them that I didn’t believe in ghosts. Later on in the conversation, I repeated that I didn’t believe, and as I said it, he took the candle out. Literally the moment the candle hit the table, lightning struck the telephone pole across the street and all the lights in here started to flicker. After that, it was kind of hard not to believe, even for me.”

But as so often is the case in haunted restaurants, it’s the workers that most keenly feel the presence of spirits. A waitress reports that roses still grow in the spot where young Margaret fell from the tree and broke her neck, despite attempts to get rid of them. A bookkeeper claimed to hear the sound of heavy breathing behind her when working alone in the building. Restaurant staff give witness to the sounds of people walking around and closing doors, in parts of the restaurant which are empty of human occupants. It’s said that the staff try to leave all at once, in order to avoid leaving anyone in the building alone. And of course, Matt reports that he still hears from customers that they’ve seen the woman standing in the upstairs window, long thought to be Rosalie looking out at the spot where her daughter fell to her death.

“Before the fire,” says Matt, “there was most definitely a presence here. When I first walked into the building, you could feel it – something was here, something was going on.” And if the stories are true, the spirits have found their way back to the Jamesport Manor Inn.

Gothic Travel Review: It’s a fairly long haul from Manhattan to Jamesport, pretty much the full length of Long Island, which can be surprisingly long. Hence the name, eh? But in my studied opinion, well worth it. On the north fork of Long Island you find yourself in true countryside – farms, picturesque small villages and wineries. For those of historical bent, you’ll be pleased to know that the first settlements on Long Island, and some of the first in the country are to be found on the north fork. And for those who don’t relish the long drive back to the city, there is a plethora of interesting bed and breakfasts to be had at a much more reasonable rate than Manhattan hotels.

I don’t find haunted restaurants to be particularly creepy, and the Jamesport Manor Inn is no exception. Instead, what you’ll find is a lovely drive, an enchanting ambiance and an incredible dinner. If you’re looking for upscale dining with a grown-local bent, and you should damnit, this is the place.

I arrived racing the sunset for photos and the view and the light was breathtaking, and after a long day of visiting haunted Long Island sites, of which there are many, the dinner and service was much appreciated. I highly recommend the duck by the way. But as for a chilling atmosphere, it’s probably not going to happen. Then again, with a wine list like theirs, does it really matter? Three crypts for an overall wonderful experience, and a great history.